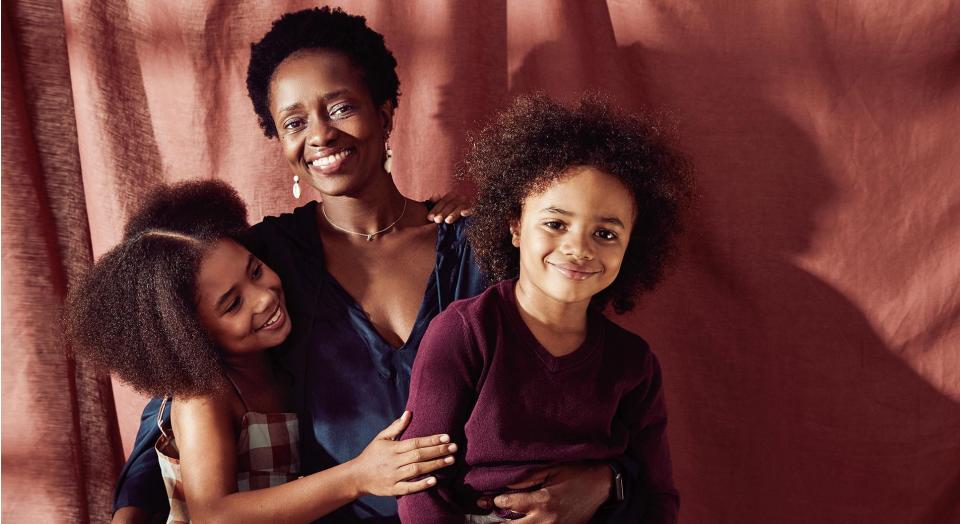 Posted in: At Home With
By Sheridan Life

This Mother’s Day, we’re celebrating with a woman who is not only a mother to two beautiful children, but also a mother figure to an entire country. Aminata Conteh-Biger, is the Founder of the Aminata Maternal Foundation; a non-profit organisation that strives to improve conditions for women in Sierra Leone, so they can safely give birth to and raise their children.

Aminata is dedicated to improving maternal health in order to give women the chance to enjoy the real beauty of motherhood.

In 2012, Aminata gave birth to her daughter Sarafina, however was faced with life threatening complications during the delivery. Surrounded by a team of medical professionals, Aminata and Sarafina were able to recover. This experience opened Aminata’s eyes to the crisis happening in her home country and essentially sparked the beginning of a new life endeavor.

“As soon as I had the experience of almost losing my daughter, I straight away went into the mode of asking - why do I have seven doctors in Australia, when there are only six obstetricians in the whole of Sierra Leone? 7.8 million people and six obstetricians... that just didn’t sit well with me.

From there, it was three years or so on a journey of research. Then, finally we registered the Foundation in 2014. In the beginning the idea was not to set up a foundation, it was just to know why. Why is it that a woman who brings a life into this world has to suffer or die, but if you're in a country like Australia, you're lucky?”

Aminata was struck by the statistics she uncovered during the initial stages of research. Her home country had the highest infant and maternal mortality rates in the world, and still does.

“It was very overwhelming when I started researching and watching videos. I’d see the horror of people just dying for the simplest things, like not going to the hospital and delivering a baby if they needed a cesarean. No mother of a child should die due to poverty. I think that is really wrong in a time where we have so much wealth, and then there are women and babies dying in the world just like that.”

The Aminata Maternal Foundation raises funds to reduce deaths, educate in schools to prevent teenage pregnancy and to support and increase the number of midwives in Sierra Leone.

“Donations are reducing mothers and babies dying, because if the mother goes to the hospital, they can safely deliver their child. We also work with a lot of teenage pregnancies. During the Ebola crisis in Sierra Leone, teenage pregnancy skyrocketed to 66.6%, and once you're pregnant, you're not allowed to go back to school.

We also help with midwives. Sierra Leone needs about 3,700 midwives and they have less than 10% of that. So, the Foundation is looking at all the holes that are causing the problem, and that’s where we find the solution. We’re also getting funds and making sure midwives are paid the way they deserve to be paid.”

The success of the Aminata Maternal Foundation in the last six years is just the beginning. With short and long term goals, and a powerful strategy in place; Aminata and her team are set to create a much brighter future for Sierra Leonean mothers and their children.

“We've been great at fundraising since 2016 and we've done all the little projects to get us established. Now the Foundation is looking at where we can be of more use on the ground to the community.

The next step is to go and build hubs in the villages, because a lot of these villages can’t travel to the city. It's a small country, but still, there are people who have never been to the city and there are no resources in their village. So, how can we reach out to these people?

I then have a bigger visual, which I've talked about in my book, Rising Heart, which is to build a bigger hospital that will provide training for midwives and schooling there. I want to make sure we have doctors and international aid coming to the country to give the skills they have to women and men, so they can simply deliver babies. That's the bigger vision.”

In September 2020, Aminata released her debut book, Rising Heart, with a portion of the royalties donated directly to the Foundation.

“It’s a story about life itself. I didn't want it to just represent women of colour or African women, I wanted to represent any person. A lot of men have read my book because of my relationship with my Dad. It’s about my life and what I've gone through, and the life that I'm living here, which is relatable to every Australian person. I wanted that to stand out.”

As a mother, Aminata encourages her children to dance with life and to enjoy every moment. Beaming with happiness, Sarafina and Matisse are doing just that.

“My kids are super kind. How to treat another human being is very important to me; because at the end of the day, we all leave this world and people talk about ‘you’ as what's important, not what you have. Those are the things that are very important to me and my husband.

They have a really beautiful spirit and energy, we're very blessed to have them. We do our best and I think every parent tries to do that. You do the best you can and your children do the best they can when they decide whatever life they want to lead.”

For Aminata, the impossible ceases to exist. She approaches every part of life with confidence and grace, and these qualities are honoured in her approach to raising her children.

“My children really dare me to be the wildest person I can be, the person that I know I am. Every time I feel like I'm being uncomfortable and I don’t want to do something, that’s when I do it. I want them to see how I’m living. I don’t ‘tell’ my kids. I teach them words and things, but we all know with kids, it’s not what you say, it’s what they see you do. So, I live my life like that, taking care of myself, so that they can learn to take care of themselves.”

Aminata doesn’t sugar coat the challenges of motherhood, but nonetheless, she cherishes every moment.

“Just looking at them and seeing a glimpse of a smile is beautiful. What an experience to carry a child and give birth to them… then after that they just make you all crazy (laughs).

The unknown is beautiful and I really like the mixture of life. I’m never striving for perfection and I like the messiness of that. That’s really what a kid does to you. They reveal something in you that you never thought you had or were capable of.”